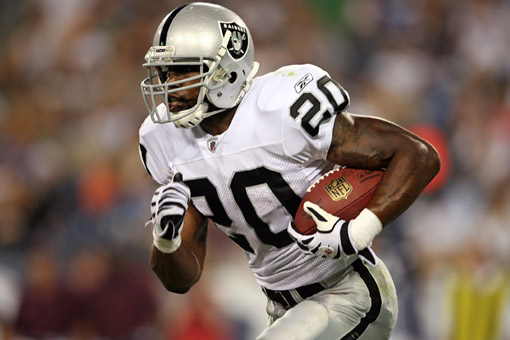 Can McFadden lead the Raiders to their first playoff berth since ’02?

It’s time for another weekly addition of fantasy football buy or sell, with a few (relatively) unknown names I’m buying this week, as well as big-time names (and one team’s entire offense) I’m selling. With one month of the 2012 season in the books, we now have a better idea of who’s going to help our fantasy teams, and who’s going to only hurt them. And since fantasy football is a marathon, not a sprint, it’s important to get an early lookout for those players that can aid your team to an eventual championship.

So, if you haven’t heard by now, the Rams have a pretty good rookie kicker. Actually, “pretty good” is such an understatement. Nicknamed, “Legatron” or “Young G.Z.,” Zuerlein has been money all year for the Rams, going 7-for-7 on PATs and 13-for-13 on field goals (through Thursday night’s game against the Cardinals). He’s made field goals of 40+ yards every week this season, including three straight games with a kicker of 50+ yards. If he’s still available in your fantasy league, I highly recommend picking him up; the Rams offense can do just enough to get him into range and they actually send him out for long field goals rather than punting against a short field.

The Bills tight end has become a favorite target for quarterback Ryan Fitzpatrick, especially in the red zone, and is definitely worth picking up on your roster this season. Though he only has 12 catches on the year, four of those of been touchdowns; he’s actually scored in every game but one this season. The Bills have a good enough offense to get into scoring range deep in opposing territories, and when they do, the 6-foot-7 tight end is likely going to be the first guy Fitzpatrick looks to.

But if Chandler is already gone, Moeaki is a tight end to keep your eye on. His stats so far this season, nine catches for 76 yards and no touchdowns, may be off-putting, he’s now the Chiefs starter due to the season-ending concussion suffered by veteran Kevin Boss. The 6-foot-3, young tight end has plenty of potential and should get his fair share of targets from quarterback Matt Cassel (or Brady Quinn).

Jones and Cobb continue to get an increase in their playing time, and should continue to do so as Greg Jennings is out for at least a week as he recovers from injury. Last week against the Saints, Jones had five catches for 56 yards and two touchdowns, and Cobb had seven receptions for 66 yards. They’re both going to continue to be important to the Packers passing attack, and are worth picking up as the season progresses.

I feel that Boldin is finally getting back into his prime in Baltimore, and becoming the Anquan Boldin we all knew back when he was with the Arizona Cardinals. His season stats may not pop out at you, 19 catches for 249 yards and a touchdown, but he’s being targeted more and more each week. He’s the Ravens No. 2 wideout opposite Torrey Smith, and with Flacco throwing more this, Boldin could be a solid fantasy starter from week-to-week. Keep an eye on him this year because he’s in for a big season.

The rookie quarterback continues to go through growing pains, so don’t let last week’s 431 yards fool you. The other three games, Tannehill never threw for more than 220 yards, and has thrown an interception in all but one game. On the season, he has two touchdowns and six interceptions, and though he’ll get his chances to air it out, the Dolphins offense still runs through their backfield. He also faces underrated secondaries the next two weeks against the Bengals and Rams.

On that note, don’t be fooled by Hartline’s big Week 4 performance against the Cardinals, either. Sure, his 12 catches for 253 yards and a touchdown were quite impressive, but you can’t expect him to have those type of games every week, let alone the rest of the season. Before his 12 receptions against the Cardinals, Hartline only had 13 through the first three weeks, with barely over 200 yards receiving and no touchdowns. And, with Tannehill’s struggles, you can’t count on Hartline being that consistent, big-game wideout on a weekly basis. With the Bengals and Rams coming up, he’s going to have a lot of physical opposition shutting him down.

I was buying into him after his big game on opening night versus the Giants, where he had eight catches for 114 yards and two touchdowns. But, as the season has gone on, we’ve all seen that that first game may have been a fluke. Since then, Ogletree has only caught nine passes for 107 yards and no scores. Granted, he’s a No. 3 wideout, but that’s why he had so much potential, since opposing defenses would key in Dez Bryant, Miles Austin and Jason Witten. However, his recent performances, as well as the underachieving play from the entire Cowboys offense, has made Ogletree not worth it this season.

I really hate saying this, but right now I’ve got to sell McFadden for yet another subpar performance through the first month of the season (which has also been hurting my own fantasy team). Though McFadden has all the talent in the world, sadly, he’s just not getting the job done. Sure, he had 18 carries for 113 yards against the Steelers a few weeks back, but overall on the season, had just 201 rushing yards on 57 carries and one measly touchdown, with 18 receptions for 111 receiving yards and no touchdowns. Though he has the potential for a big game every week, I’m selling him until he can prove that he can consistently turn out big performances.

Well, it’s time to pick on the Jets after their latest offensive output (if you can even call it that). Since their big 48-28 win over the Bills in Week 1, the Jets offense has scored 30 points in the past three weeks, including being shut out last week against the 49ers. Oh, and they play the Texans this Monday night, so don’t expect many points, either. Quarterback Mark Sanchez is once again underperforming, with five touchdowns to four interceptions this season. Santonio Holmes, their No. 1 wideout, is out for the year, and Stephen Hill and Dustin Keller, their other top guys, are fighting off the injury bug. Additionally, their run offense isn’t even averaging 90 yards per game, and has just one rushing touchdown on the season. The Jets offense is in free-fall right now, and aside from the Texans coming up this week, they still have to the Patriots twice this season, as well as games against the Seahawks, Rams, Cardinals and Chargers. It’s going to be a long season for that offense.