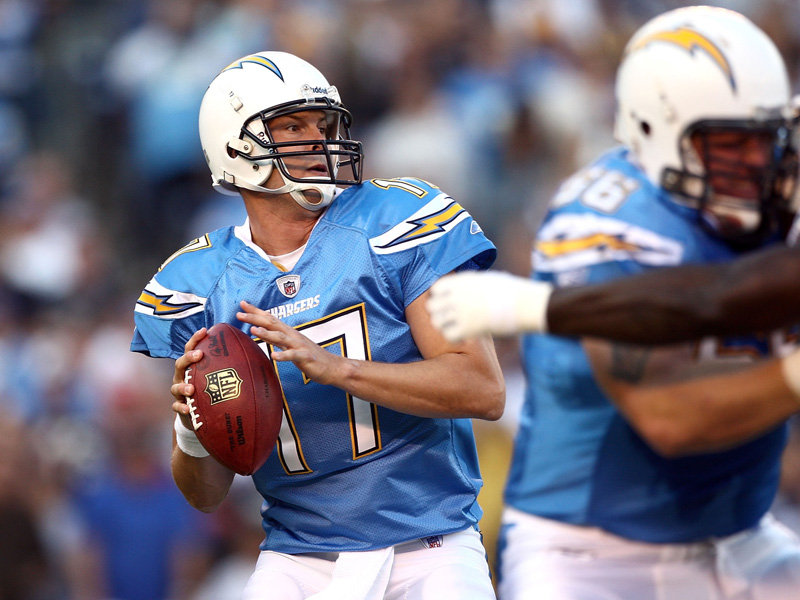 After finishing 7th overall in week three of FantasyPros’ expert rankings contest, I fell a bit to 26th for week four. Out of about 90 experts, that’s another solid week. I’m aiming high again this week, so let’s breakdown each major position in my fantasy player rankings for week five.

You know who the top dogs are this week. Aside from maybe Michael Vick and Cam Newton, the normal elite passers are going into week 5 guns a blazing and you shouldn’t have any concerns. Vick and Newton should be fine, but definitely have a red flag with matchups against the Steelers and Seahawks, respectively.

Guys I Love: Philip Rivers, Jay Cutler, Christian Ponder and Ryan Tannehill. Cutler bounced back last week and should continue to rise vs. weak Jaguars defense this week. Rivers wasn’t needed much last week but should fire rockets against a bad Saints defense this week in what should be a high-scoring shootout. Ponder was quiet last week but I can’t see him doing the same against a bad Titans D. Lastly, Tannehill is always going to be a risk, but I really like his chances against a weak Bengals defense.

Guys I Hate: Ryan Fitzpatrick, Kevin Kolb, Russell Wilson and Matt Cassel. Fitz was nice last week, but he also got careless with four picks. He won’t find life much easier against tough 49ers unit this week. Kolb is getting better but Rams are good against pass, so I’m not expecting much out of him. Wilson has that dual threat potential, but he’s been very shaky and Cards aren’t a cakewalk by any means. We could see a  Matt Flynn sighting soon. Cassel is also close to being on the way out as a starter, and he isn’t likely to turn things around with a rough matchup with the Ravens.

Was I the only one completely shocked by Mathews’ insanely small workload last week? Probably not, but I certainly wasn’t happy about it. I think the Chargers get back behind him this week and his value rises. Start your usual elite backs along with Mathews this week.

Guys I Love: Reggie Bush, Ryan Williams and Ahmad Bradshaw. Bush was eased back in against a tough AZ defense last week, and looked pretty good. He’ll be fully back this week against a scrub Cincy defense, so I love his chances. Williams is a bit shaky but has a nice matchup against a weak Rams run D. I like him to put up RB2 numbers. Bradshaw didn’t do much in his first game back, but the big thing is he’s the main man ahead of Andre Brown. He should pick it up a bit against a sketchy Browns defense.

Guys I Hate: BenJarvus Green-Ellis, Chris Johnson, Fred Jackson and DeAngelo Williams. The Law Firm hasn’t been great lately and he’s facing an underrated Dolphins defense. I’ll find a different option this week. CJ2k returned for a week, but a lot of his success was found in garbage time. I’m not believing in him yet with a tough Vikings defense on the docket. Fred Jackson faces the 49ers, so forget about him and C.J. Spiller lighting it up this week. And D-Will hasn’t really blown up all year, so I find it hard to believe he’ll go off on a stingy Seahawks run defense.

Brian Hartline took the league by storm last week, while Julio Jones had one catch for 30 yards. Rodd White is killing it, too, which is surprising since we all thought he’d see a lesser role in favor of Jones. It doesn’t look like that’s happening. Here’s who I love and hate at receiver this week:

Guys I Love: Brian Hartline, James Jones, Michael Crabtree, Kenny Britt and Andrew Hawkins. Hartlines’ 250+ receiving yards was a fluke, but him killing it wasn’t. He’ll continue to shock the world with another solid outing against a soft Bengals D. Jones should step in for Greg Jennings and perform well against a weak Colts defense. He scored two times last week, so he’s already making it happen. Crabtree has been pretty quiet lately, but I expect that to come to a screeching halt against a soft Bills pass D. Britt is getting healthy and should be back this week. He should see a good amount of targets and put up fine numbers against a still beatable Vikings pass defense. Hawkins is hit or miss, but he missed last week so I’ll play the odds and bet he goes off in week five. He’s extremely fun to watch.

Guys I Hate: Steve Smith, Brandon Lloyd and Andre Roberts. Smith goes up against tough Seahawks defense. They’ve allowed just two touchdowns the past two weeks and one was on a fake field goal. I’m not loving Smith here. Lloyd would have been a bust pick in week 4 if it hadn’t been for a total garbage score late against the Bills. I don’t like his odds if Champ Bailey is draping him this week. Roberts has been scoring like crazy, but has just 15 receptions on the year. I’m guessing he’s shutdown against a solid Ram pass D.

Jason Witten bounced back in a sickly huge way on Monday Night Football, which made a lot of us look very silly. On the flip-side, Antonio Gates continued to look like a shell of himself, while Dennis Pitta laid a goose egg (zero catches). Let the accuracy rise as we take a look at my favorites and red-headed step childs of the week at the tight end position.

Guys I Love: Jermichael Finley, Kyle Rudolph and Dennis Pitta. Finley hasn’t been elite really this year, but I think he gets going against a weak Colts defense. Greg Jennings being out should see his targets rise at a minimum. Rudolph is mainly a red-zone guy, but he could have a few shots against a bad Titans D. Pitta had zero catches last week, but I think he bounces back against a soft KC defense. He’s too good not to.

Guys I hate: Greg Olsen and Jacob Tamme. Olsen has been super hot, but I might avoid him this week if I can as he has a tough matchup with the Seahawks. Tamme isn’t the sleeper we thought he’d be. Not yet, anyways. He has a good matchup this week but I find it hard to trust him.

If you read me on a regular basis, you know my disdain for assigning value to kickers. They’re all hit or miss no matter the matchup. With that said, Mason Crosby is my favorite of the week, while I’m really high on Minnesota’s Blair Walsh, who has been fantastic and has a nice matchup with the Titans. On the flip-side, Nate Kaeding should be out again this week (giving Nick Novak nice value again), while Phil Fawson, Ryan Succop and Nick Folk are not suggested plays.

The big thing with team defenses is to notice trends and always stick with your elite defenses, regardless of matchups. Well, unless they’re facing the Patriots or Packers. Still, you’ll want to keep rolling with your Ravens, 49ers, Bears and Texans this week. It’s also time to respect the Cardinals and Vikings. There aren’t any real sleeper units this week, except maybe the Dolphins, who continue to be over-looked. On the flip-side, don’t be caught using the Colts, Jaguars, Browns, Chiegs, Redskins or Saints this week.