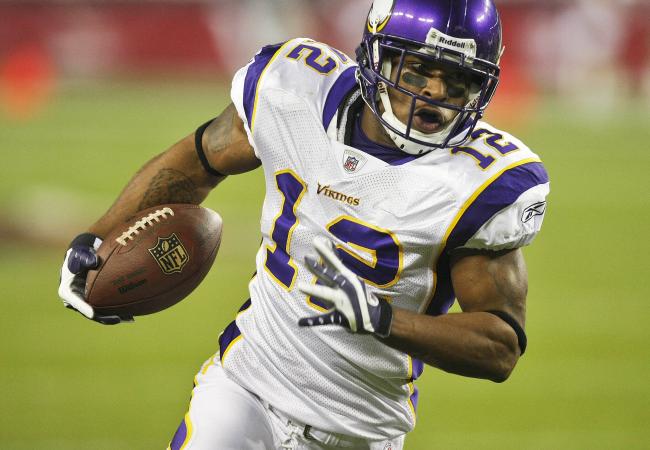 Will Harvin explode with Sidney Rice out?

I moved into a new apartment over the weekend, so I was forced to watch NFL Red Zone all day on my phone. I’ll settle with miniature Red Zone over no football at all although this week was rather lackluster scoring-wise in most cases around the league.

This week was certainly telling, though, for many players in terms of their fantasy value as crucial decisions need to be made for fantasy teams looking to make a playoff push.

Adrian Peterson called Harvin the best player that he has EVER played with…Adrian Peterson! Harvin is starting to be mentioned as an MVP candidate for the incredible season he’s having, and you can’t really dispute it. Only 2 players in NFL history have totaled more all-purpose yards through five games than Harvin who has totaled 814 yards all-purpose. Harvin is also only the 8th player in NFL History to score a rushing, receiving, and kickoff return touchdown in a team’s first five games.

I was cursing James Jones all Sunday since he led my opponent to a narrow victory over me, but Jones’ two touchdowns Sunday surely raised some eyebrows in terms of his fantasy value. That makes it 4 touchdowns in the last two weeks for Jones. With Jordy Nelson having a down year, Greg Jennings out of the lineup, and Jermichael Finley dropping everything thrown his way, Jones has been a reliable option for Aaron Rodgers here at the start of the 2012 season.

Wayne, on 13 catches, totaled 212 receiving yards and a score. He was targeted 20 times and has three games (out of the four the Colts played) where he was targeted 15+ times by rookie quarterback Andrew Luck. Wayne’s 506 yards in four games is his career best total over four games. You better believe Andrew Luck will continue to look Wayne’s way as he continues to develop into a stud quarterback in this league.

Trent Richardson rushed 17 times for 81 yards and a touchdown. He also tacked on 5 receptions for 47 yards. Richardson’s TD was his fifth of the season and his fourth consecutive game with a score. Richardson will be the centerpiece of this offense for quite some time, so his dosage should only increase over time.

Bradsahaw got a healthy share of carries, rushing 30 times against the Browns. Bradshaw looked explosive, racking up 200 yards on the day. Backup Andre Brown also suffered a concussion, which gives Bradshaw one less back breathing down his neck.

Vick continues to prove that he cannot be a reliable fantasy starting quarterback. The days of him gaining 171 yards rushing are over: his rushing stats no longer pad his passing yards, which itself is not too impressive. Vick finished the day with 175 yards passing but more importantly two lost fumbles. While some of the blame rests with his offensive line, Vick’s fumbling, especially in the red zone is crippling regardless of what causes it. Since the start of 2011, Vick has 9 red zone turnovers which is 4 more than any other player in that range. When asked about it, Vick had “no explanation”.

The Bengals are developing a steady passing attack, and as I said last week, they are force feeding the ball to A.J. Green in big-time, scoring situations as they should. Green-Ellis isn’t making the Bengals think otherwise either: on Sunday, he rushed 9 times for 14 yards and only tacked on one more reception.

Bellichick has joined Mike Shanahan in the Fantasy Owners Doughouse. Now look, I love Stevan Ridley and think he’s a great talent, but you just never know with Bellichick. Shane Vereen had one carry on the night. When did the carry take place? When the Patriots were on the one yard line: Vereen took it in for the score, taking away a score for which Ridley put in the work. Next week, they’ll start running dives with Danny Woodhead. Then the week after that, Brandon Bolden will get goal line touches. Except for Ridley, the others are as risky fantasy plays as you can get. And although Ridley is definitely the safest, best play, he still gets screwed by Bellichick’s Shanahanigans — spelling intended.

LaFell led the Panthers in yards on Sunday with 44 yards on three catches. That’s not saying much though as Cam Newton and the Panthers’ offense looked abysmal. LaFell only had three catches, which is actually his highest total in the past few weeks. Last week, he didn’t catch a pass and the week before, he only caught one ball. LaFell started off the season leaving fantasy owners optimistic, but his value has surely plummeted over the last few weeks.