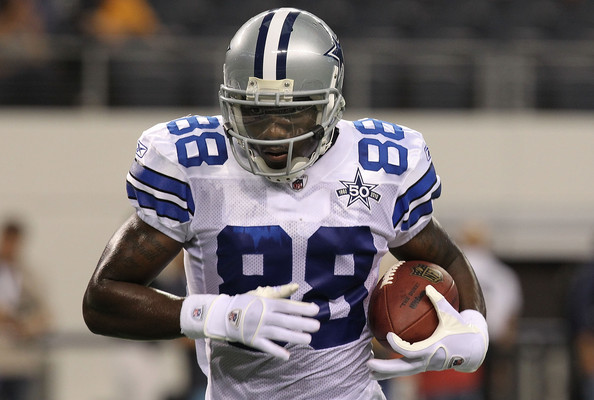 Dez Bryant should find himself as a top-five WR in 2013.

Aaron Rodgers throws for 6 TD, Ray Rice and Arian Foster each run for 2 TD and Calvin Johnson torches the Eagles for 135 receiving yards – all is normal in the world of fantasy. Except, of course, how do we explain Shonn Greene, Brandon Weeden and AP’s fifth consecutive week without reaching the end zone? Off we go…

Chief’s fans may be reconsidering last week’s hearty booing of quarterback Matt Cassel as he lay injured on the field. Replacement Brady Quinn passed for 180 yards, 0 TD and 2 INT while leading his team to three (yep) offensive points against hapless Tampa Bay. Dwayne Bowe owners can’t be pleased about his three catches for 21 yards.

Wait, Randy Moss is still in the league? Apparently so. The Forgotten One checked in with two catches for 75 yards, including a 55-yarder versus the New York Giants. Moss led the team is receiving yards, but he’d still be a tough start moving forward.

Pain Alert # 1 – After consecutive resurgent games and a date Sunday with the porous Raiders defense; you started Falcons RB Michael Turner. Well the Burner lived up to his name burning fantasy owners with his 11 rush 33 yard effort.

Pain Alert # 2 – In light of an almost unrelenting string of miserable efforts and because he was facing the rugged Steelers defense, you sat Chris Johnson. Of course, Johnson gets 19 rushes for 91 yards and adds four catches for 23 more pushing disgruntled CJ owners further over the edge.

Pain Alert #3 – Enraged over his miserable lack of production all year, you outright cut Jets running back Shonn Greene. Boy that felt good. Except until yesterday when Greene, one of this week’s most dropped players, rewarded everyone with a silly 161 yards rushing and 3 TD. Maybe you can sell high, but even after Sunday’s effort, there’s likely still not much of a market for the plodding one.

Maybe Andrew Luck isn’t as automatic as we thought: The formerly surging QB, struggled mightily against a pedestrian Jets D, tossing 2 INT and 0 TD. His 280 yards passing likely didn’t do much for owners who have become comfortable starting their late round pick. Meanwhile fellow rookie QB phenom RGIII finished the day as the second most prolific rusher with 138 yards and 2 TD. Since he’s a quarterback, Griffin also threw for 181 yards and a TD. Must start, but you already knew that. Is Luck a must start? That’s debatable now, but closer to yes than no.

No Longer Dez-spicable: Cowboys WR Dez Bryant rises from the ashes and catches 13 passes for 95 yards and a pair of touchdowns. Bryant had 15 targets and was clearly Romo’s preference over Miles Austin (5 targets), who finished the day with just 2 catches for 31 yards.

Ray Rice owners aren’t going to complain much on a day when he scores two touchdowns, but his touches are becoming a concern. In the past two weeks Rice has had just 33 rushing attempts and has caught only four passes. Maybe when the weather becomes more of a factor, Baltimore will revert to form, but for now it’s an issue for owners expecting Rice to be a work horse.

Now what? Fred Jackson runs for 53 yards and 1 TD, along with 5 catches for 30 yards, while C.J. Spiller rushes for 88 yards and 1 TD and catches 4 passes for 22 yards against a tough Arizona defense. Me? I’m trying to trade them if they’re on my team.

Speaking of the pain of sharing: Felix Jones is risen. Cowboys running Demarco Murray went out with a foot injury, but that was after Jones had scampered for a 22-yard TD in the first quarter. Jones finished with 92 yards rushing and Murray had 93. The severity of Murray’s injury is unknown, as is the damage to Murray’s chokehold on Cowboys’ carries.

Count Me Out: Yes I saw Randall Cobb’s 7 catch, 105 yard performance last night, but I’m not jumping on the bandwagon. No question he’s electrifying, but he’s benefiting from the absence of Greg Jennings and the lingering effects of Jermichael Finley’s injury. With Jennings likely out another week he may have some continuing value, but Rodgers will eventually zero in on Jennings and Jordy Nelson.

Patriots TE Aaron Hernandez returned from his ankle injury, playing only 38 snaps. In those snaps; however, Hernandez was targeted nine times and caught 6 passes for 30 yards and 1TD. Look for lots more from Hernandez, who by all accounts, was moving ahead of TE Rob Gronkowski as Brady’s favorite target before his injury.

Next week’s matchup versus the stout Vikings defense might be enough to keep others from pouncing, but you might want to grab cardinals RB William Powell. With Ryan Williams (gone for the year) and Beanie Wells (out for two more months), Powell battled journeyman Larod Stephens-Howling for the backfield vacancy Sunday and it was Powell in a knockout. Powell rushed for 70 yards on 13 carries while LSH did his best Shonn Green (until this week) impersonation, finishing with 22 yards on 11 rushes. His schedule is very tough moving forward, but as a spot starter Powell could help you more than guys like Peyton Hillis, Daniel Thomas, Pierre Thomas, Isaac Redman and David Wilson who seem to be clogging up rosters.