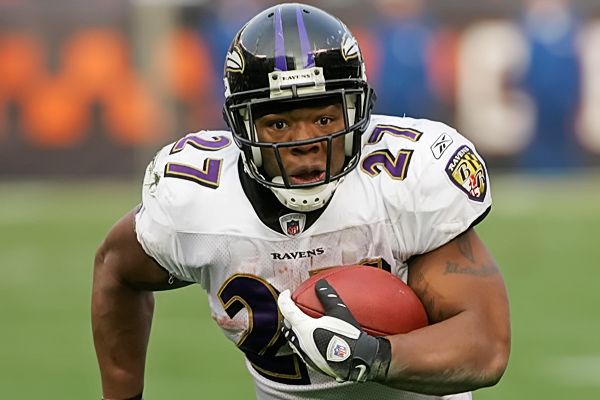 Rice should finish the season strong this week.

What did we learn this week? Hmmm. Well, we learned Cam Newton is no RGIII, we learned Ray Rice is no longer Ray Rice and we learned that in addition to his sore groin, Dez Bryant likely has a massive headache today. Onward…

With two first- half rushing touchdowns, it was looking like a massive day for Colts QB Andrew Luck. And then came the 2nd half where Luck passed for just 49 yards and added a fumble. Luck has now gone consecutive games without a touchdown pass.

Chris Johnson owners are no doubt overjoyed with his breakout 195-yard, 2TD game Sunday against the Buffalo Bills, but it had to be hard to watch fellow Titan Jamie Harper run in a pair of touchdowns from the 1-yard line. Buffalo has a bye week next week, but Week 9 opponent Arian Foster must be licking his chops thinking about the holes ahead for him. Early prediction: Foster runs for 11 touchdowns against Buffalo. And Ben Tate adds four of his own.

Pain Alert #1 – Titans wide out Kenny Britt, improving every week and poised for takeoff Sunday, starts out with 3 catches for 26 yards on the Titans first drive. Rest of game: 1 catch for four yards.

Pain Alert #2 – You were watching NFL Red Zone wondering why you hadn’t seen anything from sizzling WR Dez Bryant. Wait, there he is. Looking crazed with eyes rolling into the back of his head, Bryant makes his Red Zone debut getting smelling salts on the sideline. Bryant’s status for next week is looking very shaky after a serious blow to the head against Carolina.

Pain Alert # 3 – Abysmal all day against the porous Jacksonville defense, the Raiders mount a length of field drive in the fourth quarter looking to tie to game with a late TD. All the way down to the nine-yard line, first-and-goal and then what do the Raiders do? Of course, consecutive penalties, eliminating any chance McFadden or any Raider other than Janikowski staves off another crappy day. Fittingly Jacksonville then allows multiple additional chances for the Raiders, who are still unable to convert until the defense forces a fumble within Janikowski’s field goal range.

Pain Alert #4 – One week after leaving the set of the Walking Dead and showing up in a Jets uniform for 3 TDs on 161 yards rushing, Shonn Greene returns for an encore versus New England and racks up a touchdown, 54 yards rushing and six catches for 34 yards – only to leave late with head injury.

As noted here last week, Ray Rice is now a full-blown situation. After averaging just 16.5 rushing attempts the past two games, Rice reached his nadir this week with nine. Granted they were getting pounded by the Texans, but Rice was a non-factor after getting his sixth rushing attempt just one minute into the second quarter. Getting blown out is usually gold for reception-happy Rice owners, but Ray Ray caught five passes for 12 (yep) yards.

Darren McFadden? See above. The numbers change slightly, but the story’s the same. Even with an awesome home matchup against the Jaguars, McFadden stunk like old fish. Lots of tasty matchups for DMC in the weeks ahead, but this is scary. And he hasn’t even been injured yet.

Can’t quite figure out why, but we seem to have a situation in St. Louis too. Steven Jackson looks fresh and is running as hard as ever, but he’s getting only slightly more carries than Daryl Richardson. With SJax getting 24 carries and 109 yards in the last two weeks versus Richardson’s 19 carries and 112 yards, it’s a draw. SJax got a TD this week, but Richardson pulled in three catches for 43 yards. With a residence in the rugged NFC West, there seems to be trouble ahead for the duo.

Now that the stress of bye weeks is beginning to recede, you might want to consider stashing widely-dropped Cedric Benson. Alex Green rushed for just 35 yards on 20 carries Sunday, proving again that he won’t be taking over for Benson. Expected to return in Week 13 or 14, Benson could have value, especially in Week 14 (at home against Detroit) and Week 16 (at home against Tennessee). Even when healthy Benson wasn’t a world-beater, but if you’re looking at a roster full of guys you know you can’t start, he might be a useful add.

So much for the freight train rolling through Tampa: Bucs running back LeGarrette Blount had been making a push for quality touches of late with a pair of TD’s in the past two weeks and 58 yards on just seven rushes last week. This week, with Doug Martin owners getting very nervous, Blount finished with -2 yards on five rushes and looked positively lifeless on a pair of failed attempts from the 1-yard line. Hard to say whether the boos cascading down were intended for Blount or the Tampa coaching staff, but the cheers were clearly coming from Martin owners.

Ladies and gentlemen start your engines: The race for Rashad Jennings and La’Rod Stephens-Howling is about to begin. You might also want to consider Jaguars WR Cecil Shorts. With Laurent Robinson not really recovering and Justin Blackmon not really participating, Shorts has become the man in an offense that just lost Maurice Jones-Drew and Blaine Gabbert. Losing the woeful Gabbert can only help Shorts, who finished Sunday with 4 catches for 81 yards and a 1 TD (along with a late fumble that cost the Jaguars the game).

If you’ve been suffering through Jermichael Finley (2 catches for 31 yards) or if you have Fred Davis (Achilles), you could do a lot worse than Raiders’ TE Brandon Myers. The only problem with Myers, who averages nearly five catches and 49 receiving yards per game, is that he plays for the Raiders and is therefore destined to torch your fantasy team.