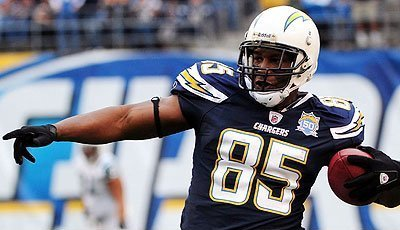 Just because standings are starting to take shape and most of the hot waiver wire pickups are already taken does not mean it’s too late to make season-changing moves.  There are plenty of telling performances at this point of the season which should make you consider new pickups or trades to jockey for better positioning in the standings.

DeMarco Murray will be out for at least a week or two with a foot injury.  Jones looked great with 105 yards on 19 carries as the Cowboys finally looked committed to the run on Sunday.  Jones is worth picking up if you’re desperate for a running back as bye weeks and injuries mount.  The Cowboys face the Panthers Sunday, and they have been rather weak against the run this year, so Jones could continue to put up respectable numbers with Murray out.

Finally Gates had a solid game, with season highs for yards (81) and targets (10).  Gates added two touchdowns to prove to owners that he still has it in him.  Although on a bye next week, Gates will be ready to fire again with a matchup waiting versus the Browns next.

Williams had a touchdown and 113 yards, including an impressive 62 yard catch downfield.  This is the second consecutive game for Williams where he totaled over 110 yards, including a long 60+ yard play.  The Bucs may start to loosen the reigns on Josh Freeman – as the offense thrives when they let him throw downfield – which is great news for Williams.  Vincent Jackson is undoubtedly the #1 receiver, but that draws a lot of attention away from a vertically dangerous Williams.

The Ravens defense isn’t slipping just because they allowed 29 points last week.  Injuries are also plaguing the team defense’s value: both Ray Lewis and Ladarius Webb are out for the season.  Those losses come without Suggs in the lineup to make up for any losses either.  The Ravens defense even with Lewis has been struggling with the run considerably.  With Arian Foster and the Texans coming to town, the defense has minimal value this Sunday and even beyond.

Best is STILL not cleared for contact and his last concussion was a full year ago.  Best’s career has to be over, so he’s not worth stashing in the hope that he will come back.  He’s not coming back…ever.

Ryan Mathews returned to the starting lineup Monday night and got the vast majority of looks.  Battle only had two catches for a whopping three yards.  Until Mathews breaks another bone (which may in fact be very soon), Battle has very little value.

Powell started to receive more and more carries prior to Week 6, but a dislocated shoulder and a solid performance by Shonn Greene Sunday lowers Powell’s value moving forward.  The Jets have not lost faith in Greene which is proved by the fact that he carried the ball 32 times.  Greene rushed for 161 yards and three touchdowns Sunday, proving he’s still the top dog in New York’s backfield.  Powell is likely out for a few weeks and the Jets have their bye Week 9, so Powell won’t have any value until several weeks.

4 Responses to Week 7 Fantasy Football Risers and Fallers: Antonio Gates Has a Pulse